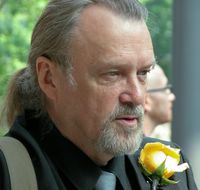 When I tried to google up a photo of Bob Hunter tonight shortly after I heard of his death, I was amazed at how many people are or have been called Bob Hunter.

"Our" Bob was really a good man. A real giant as I wrote in the note I sent to the Greenpeace website.

A lot of people will remember him in the days and years to come, and beyond. If Greenpeace ever had a founding father, Bob was the one. Rex Weyler's recent book on the early days of Greenpeace is a great tribute to Bob's legacy.

The first time I met him and his wife Bobbie, I was very young (it must have been 1977). They had good reasons to doubt whether all these young people who were approaching Greenpeace (often with dodgy or limited credentials), and who were trying to mimick them, would ever deliver anything good. So they were keeping a reasonable distance, but at the same time they were always correct, encouraging, and never dismissive. That's why they stand out as the founding fathers.

The context is different now. But when young people approach me because they believe that I can help them, I try to remember that I was lucky to be given a chance thirty years on, and that I must not break the chain. Hundreds of us are carrying the legacy, and people wanting and able to take it from us are thousands. That's enough to build an "army".
Published by Unknown at 1:35 AM