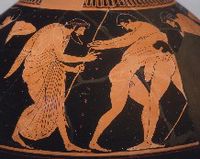 Having cooperated with the Madrid Olympic Bid for six months, I had the privilege of following the Singapur ceremony today in their HQ, together with other consultants and the staff that did not make it to Singapur.

Everyone was correct when the news came that Madrid had "lost". Todos dignos, as they say in Spanish. Very dignos.

Madrid had done a real effort on the environmental front. For example, with regard to public transportation, zero private cars Olympics, and 100% renewable energy.

I am concerned thus that the signal the IOC is sending with London's victory (a chaos as far as transportation is concerned, let alone other aspects of the City), is that -- after all --they don't give a damn about the environment.

I dont want to sound bitchy, but that's what comes out.

There are a lot of other lessons to be learned. I have already shared a lot of them with the Madrid Bid team, and will share more with them in the coming days, I expect.

London's victory is not David's (London) over Goliath (Paris). Looking objectively, Madrid was Goliath.
Published by Unknown at 4:16 PM

Email ThisBlogThis!Share to TwitterShare to FacebookShare to Pinterest
Tags: Miscellaneous