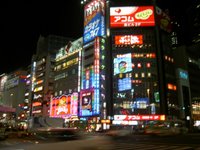 Life is a paradox, they say.

1. I just watched Al Gore’s documentary An Inconvenient Truth, from 10,000 metres above ground as I was flying between Thailand and New Zealand today;

2. The airline company was Emirates, and it was a pleasant surprise to see that they were showing the film, because freedom of environmental information is relatively scarce in the United Arab Emirates, especially as far as Climate change is concerned.

At the end of the film, the producers have inserted in the credits section things that viewers can do themselves about Climate change (Global warming as they say in the US). One of these captions says something like “tell everyone around you to go see this film”. I think that’s right; Al Gore and his team have done a good job. Everyone should see it. Go!

The photo that illustrates this piece is not a particularly good one, but it is relevant. I took it last week in Tokyo. Like in many other cities, the neon that “lights” (or blinds?) the city is spectacular, and in some sense glamorous. But as I was walking through the streets of Tokyo by night, I could not help thinking of the paradox whereby increasingly public authorities are deploying educational tools to convince ordinary people to switch off lights, computers or TV sets when they are not needed, while corporations keep wasting energy to sell all sorts of junks (or only to reaffirm their presence). Of course everyone has a role to play and individual gestures by ordinary people count, but why aren’t governments using their regulatory power to also switch off unnecessary street advertisement lightening? I remember that in 1973, as soon as the first oil crisis took place, governments (at least in France, where I lived at the time) were very prompt in banning neon advertising. [Then they built, in France at least, a massive number of fully subsidized nuclear power plants, and commercial neon lightening came back...]. Well, now there is another fuel crisis called Climate change, let alone other contemporary and forthcoming concerns over the security of energy supplies.

Coming back to Al Gore’s film, the fact that it was shown in a passenger aircraft reminds me that the Kyoto Protocol does not cover the international emissions of civil aviation (nor shipping). This is more than a paradox. With the rate at which civil aviation and international trade are booming, this seriously undermines the spirit and goals of the UN Framework Convention on Climate Change and of Kyoto. No wonder that so many industries that are heavy energy consumers are dragging their feet with the Kyoto targets, if they see that civil aviation and shipping (energy consumers by excellence) are getting away with an exemption, which represents in effect the equivalent of a huge hidden subsidy.

As the Climate policy community is in the middle of the negotiation of the Kyoto 2 agreement that needs to be in place in 2012 once the first Kyoto Protocol commitment period has passed, the environmental integrity of the international Climate regime would be severely undermined if it continued to ignore the need to reduce with binding targets international greenhouse gas emissions from commercial vessels and aircraft.
Published by Unknown at 6:32 AM