The Long and Winding Road Towards Rio+20 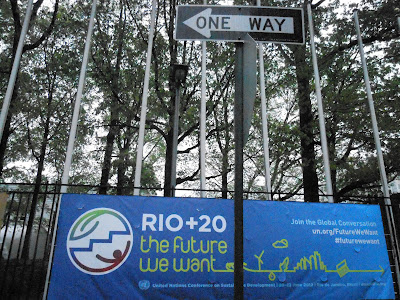 On Monday 23rd April, when the last two weeks' session of informal negotiations for the Rio+20 conference began at UN Headquarters in New York, I took this photo and posted it on my Facebook page with the following comment: "The sign on the photo says 'one way'; so why can't governments agree?"

Two weeks later when the talks ended on Friday 4 May in the evening, I got this other photo taken in a nearby street corner to illustrate the state of the negotiations. 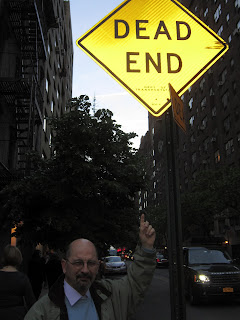 A clumsy process had failed to break the deadlock; government delegates continued to disagree on most key issues; there was at least as many road blocks on the way to Rio as ever before; the only thing government delegates could agree was to to meet again in New York in a few weeks, from 29 May to 2 June to hold further talks.

By 22 May, the Co-Chairs will attempt to produce another streamlined document that can form a new basis for negotiations, taking into account what they've been hearing in the last two weeks. Whether this last ditch effort fails or not, it is clear that not all the major issues will be resolved during this last informal session in New York.  But this is how it should be: at that point we'll all move to Rio and the buck will pass to the Brazilian government who will assume the presidency as host country for the third and final session of the Preparatory Committee and for the Summit proper. Civil servants and diplomats like the ones in New York are very good at maintaining and protecting their countries' positions. But they usually lack the flexibility to bring consensus; that's the job of the politicians, and these won't show up before we're in Rio. So, don't panic, as long as broadly speaking all options are left open before we move to Rio, it is still possible to envisage a successful outcome at Rio+20, if the politicians take their responsibilities seriously next month. That was my optimist side.

On the realistic side, my Varda Group colleague Kelly Rigg who was with me in New York last week has just written an excellent piece in her blog in the form of a letter to Heads of State and Government. Kelly shows how negotiators from all sides tend to protect their own vested interest, often in contradiction with what their leaders have said or signed in other fora. For example, in the preambular text which refers to the need to eradicate poverty, the US negotiators say they only want to eradicate "extreme" poverty; the US has also proposed to delete the adjective "clean" from the sentence which reaffirms commitments regarding the human right to safe [and clean?] drinking water and sanitation. What reading can we make of this? Let's get rid of extreme poverty because it bring insecurity, but not of poverty as a whole because it'd mean we'd have to share wealth in earnest? And let's avoid people dying from dehydration because it doesn't look good on TV, but slow death due to polluted water is okay?  The G77 countries (developing countries for the most part, led by countries that have emerged in the last two decades, like China, Brazil and India) are also demonstrating shortsightedness when they insist that "each state has the right to determine its national energy policies in accordance with its national requirements"; right, but let's not forget the obligations enshrined in the UN Framework Convention on Climate Change adopted 20 years ago at Rio'92: "The ultimate objective [...] is to achieve [...] stabilization of greenhouse gas concentrations in the atmosphere at a level that would prevent dangerous anthropogenic interference with the climate system. Such a level should be achieved within a time-frame sufficient to allow ecosystems to adapt naturally to climate change, to ensure that food production i8s not threathened and to enable economic development to proceed in a sustainable manner" (UNFCCC Article 2).  And the European Union, despìte its commitment to decrease its environmental footprint best illustrated by its leadership in climate policy, continues to drag its feet when it comes to  the elimination of environmentally and socially harmful subisdies in agriculture and fisheries...Talking of subsidies also, the members of the G20  already agreed  in principle in 2010 to "phase out over the medium term inefficient fossil fuel subsidies that encourage wasteful consumption, taking into account vulnerable groups and their development needs." The G20 countries will hold their own summit in Mexico a couple of days before Rio+20; shouldn't this be the perfect opportunity for them to put their stated policy in motion with a time-table and target dates? The strong signal that the markets need to give the much needed push for the renewable energy sector worldwide, on this, the UN-designated  International Year of Sustainable Energy for All.

Published by Unknown at 7:28 PM