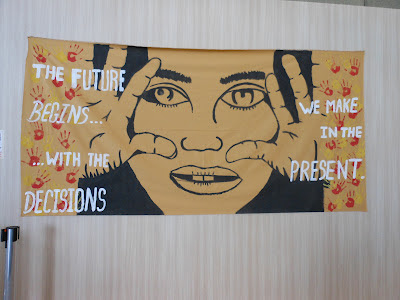 Every morning since I've arrived in Rio four days ago I see from my appartment windows the mountains around the city covered by a thick layer of clouds, as if Mother Nature was watching and expecting a storm during the negotiations in Rio Centro on the text of "The Future we Want", the declaration Heads of State and government are supposed to adopt next week here at the Earth Summit. There are only a few days left before the summit begins, and negotiations continue to go extremely slowly. It doesn't look like this is going to change in the next few hours unless a big storm shakes things up.

A UN high level official was telling me last night that she remained optimistic"because the politicians cannot let the summit fail". Yep, but what's their definition of success and failure? Will they come to save face, or to save the planet?  Talking of politicians, we have hardly seen any of them yet in this two year-long process. In other instances the final preparatory meeting(s) were held at ministerial level to prepare properly before the Heads of State and Government arrive. This time, with maybe one exception a month and a half ago in New York, I don't think I've seen any minister taking part directly, and by definition the mandate of the civil servants in the negotiations is too narrow.

Key issues where negotiations are stuck include:
With this background, disputes continue on key sectoral and cross-cutting issues,  including:

The Ambassador of a large industrialized country who knows my ties with many Non Governmental Organizations (NGOs) shared with me the other day his impression that NGOs had been "unitednationized" through this  Rio+20 process. It was his way of saying that he thought NGOs were too soft and should speak up more loudly and clearly, so that the Heads of State and Government can hear them. Unless they can hear them, how will they listen? I can't say whether the Ambassador's remark on the NGOs was entirely fair, but indeed  I agree that NGOs are indispensible natural elements to make sure that the perfect storm we need in the coming days does happen here in Rio!

This blogpiece is also available in español, HERE (AQUÍ) on the website of the Spanish news agency EFE.
Published by Unknown at 12:58 PM