Nuclear test: what should we do? 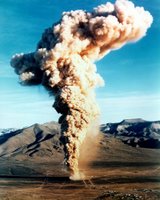 When I read that the North Korean authorities claim that their underground nuclear test has not "resulted in any leak of radiation", what comes immediately to my mind is this photo of the venting of the US Baneberry "underground" test in the Nevada desert in 1970. Greenpeace was the first, in 1981, to leak this now iconic picture; it was Allan Thornton (from Greenpeace at the time) who put his hand on it in Washington DC.

The use of nuclear weapons explosions for political and "diplomatic" purposes is always appauling. In all circumstances.

In the coming hours, we shall hear a lot of condemnations on the part of the international community and individual governments of course.

What could have been the most effective response in the last few days when North Korea threatened to perform its nuclear test?

Wouldn't it have been for the US and Chinese governments to announce that they would ratify the Comprehensive Test Ban Treaty (CTBT) of 24 September 1996?

Annex 2 to the Treaty contains the list of signatories that need to ratify for it to enter into force. Most of them have now ratified. With the exception of: China, Colombia, Egypt, Indonesia, Iran, Israel, and the USA.

It would have given the moral high ground to those who will be prompt in condemning today's nuclear explosion in North Korea, but who yet have not banned nuclear testing themselves.
Published by Unknown at 8:06 AM