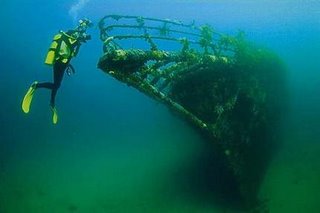 Yesterday around lunch time, friends from the Greenpeace diaspora started to bombard my BlackBerry with emails: the story that the brother of the French presidential candidate Ségolène Royal had been a member of the team that sank the Rainbow Warrior twenty-one years ago in Auckland, New Zealand had suddenly become headline news in France and New Zealand.

[The information was published Chez Rémi exactly one month ago]

The resurgence of this story in the middle of the French Socialist Party primaries has a taste of dirty politics. Like the entire twenty-one year old Rainbow Warrior affair.

Of course, Ségolène Royal cannot be blamed for what her brother was doing twenty-one years ago. [She can't be admired for it either; I say that because -- let's face it -- all those in France who thought it was right to sink the Rainbow Warrior have not vanished]. But the story does remind voters that she was herself at the time serving in the Elysée Palace as adviser to President Mitterrand, and that another French Socialist Party primaries contender, Laurent Fabius, was the Prime Minister when the Rainbow Warrior was sunk.

It is hard to anticipate today whether the Rainbow Warrior will stay or not in the landscape of the current French presidential race. But rather than watching from the side, the French Green Party (and maybe French environmentalists as well) could take the resurgence of the Rainbow Warrior as an opportunity to call upon the Socialist Party and other candidates to commit to giving priority to the universal adoption and implementation of one of the most important legacies of the Rainbow Warrior, the Comprehensive Nuclear Test Ban Treaty (CTBT), and the thirteen steps to prevent nuclear weapons proliferation that were agreed by the Review Conference of the Parties to the Treaty on the Proliferation of Nuclear Weapons (NPT). With the Bush administration's preventive war and counter-proliferation doctrine against the non-proliferation regime, and with so many candidates at the threshold to become Nuclear Weapons States, this would be an opportune way for French mainstream politicians to exorcize (once and for all?) the ghost of the Rainbow Warrior.

The world (including France) has changed considerably since 1985. But it is amazing to see how the Rainbow Warrior continues to haunt French politics so many years later. As former Rainbow Warrior crew member in its very early days, and as a French man, I can't help but find it almost fascinating.

In 1998, I was in Lisbon on another Greenpeace ship, the Sirius, and we welcomed on board the mother and the sister of Fernando Pereira, the Portuguese photographer who was killed by the French Secret Services' bomb placed on the hull of the Rainbow Warrior in 1985. Because the visit took place on 10 July, on the anniversary of the bombing, it was an intensely moving moment that I will never forget. With Ségolène Royal putting so much emphasis on family values in her electoral campaign, maybe she could pay a visit to Fernando's family, next time she's in Lisbon. She'd learn something.
Published by Unknown at 9:44 AM