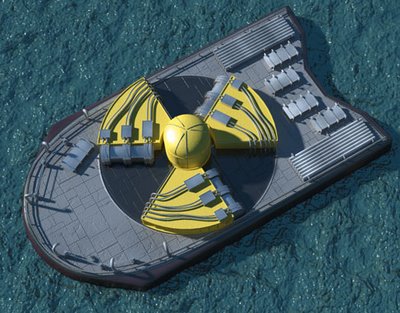 No, this photo is not taken from a trailer of the next Star Wars movie, no!

It is a model of one of the floating nuclear reactors under construction in Russia, an issue we have discussed several times Chez Rémi.

I am posting this piece from Tokyo where, as part of an environmental scoping mission I am doing, I visited the office of Greenpeace Japan.

There, I had the pleasant surprise of running into Anne Dingwall (a Greenpeace veteran who presently works in the Greenpeace Japan office), who just sent me the article with this photo published in Popular Science, after I told her that I think everyone should pay greater attention to the development of floating nuclear reactors. Anne was obviously intrigued, did a google search, and found the article with this great photo.

Anne spent her entire life in Greenpeace. She's been everywhere kicking asses (as they say in her Canadian country town) from Antarctica to the Amazon where she lived for several years, from China to Russia where she ran the Greenpeace office during Gorby's Perestroika, etc.

I am glad she's intrigued by these floating nuclear reactors, because if someone can pull off a team to kill that project, it's her!
Published by Unknown at 5:00 AM