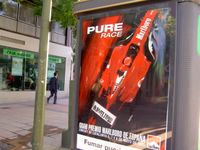 Getting away with murder is part of Philip Morris/Altria's core business, we all know this. (4.5 million human deaths per year worldwide due to tobacco smoking).

But this week in Madrid (Spain) they really went over the top, with their "Pure Race" posters (see photo).

Playing with the two different meanings of the word race is particularly unacceptable this week, on the 60th anniversary of the fall o the Nazi regime!

What is Philip Morris trying to say?

Even if the double-meaning of the word race is a coincidence, and they did not mean it, this says a lot of Philip Morris' so-called corporate social responsibility!

By the way, the US have still not ratified the World Health Organisation's Framework Convention on Tobacco Control ! Could this be because Philip Morris is the largest donor of the US Republican Party? Our friends from the Campaign for Tobacco Free Kids seem to think so.
Check the chart on their website about the contributions received from tobacco companies by Republican and Democrat candidates in the US. Interesting how the political system can be corrupted by what is perhaps (with the arms trade) the least ethical of all legal businesses.