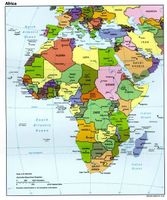 Inter Press Service have put out an interesting piece on the small print in this week-end's G8 Finance Ministers proposal on debt cancellation for Heavily Indebted Poor Countries.

"The G7 finance ministers agreed Saturday to write off the debt of 18 of the poorest countries, but firm prescriptions of privatisation hovered over the debt relief offer. Finance ministers from the Group of Seven of the world's leading industrialised nations -- United States, Canada, Japan, Britain, France, Germany and Italy (the G8, minus Russia) -- agreed to write off 100 percent of the debt of 18 of the poorest countries, mostly in sub-Saharan Africa.

That will amount to debt cancellation of about two billion dollars a year. Campaigners focusing on debt relief welcomed the move. But the finance ministers' agreement contains a provision on privatisation that has the potential to deliver to them more money than they wrote off.

The ministers reaffirmed in a statement at the end of their two-day meeting Saturday that "in order to make progress on social and economic development, it is essential that developing countries put in place the policies for economic growth." Among these, they must "boost private sector development, and attract investment," and ensure "the elimination of impediments to private investment, both domestic and foreign."

The G8 Finance Ministers statement is available online on the G8 UK Presidency website.
Published by Unknown at 1:31 PM