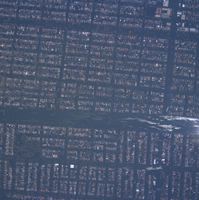 “Environmental Justice is the fair treatment and meaningful involvement of all people regardless of race, color, national origin, or income with respect to the development, implementation, and enforcement of environmental laws, regulations, and policies. EPA has this goal for all communities and persons across this Nation. It will be achieved when everyone enjoys the same degree of protection from environmental and health hazards and equal access to the decision-making process to have a healthy environment in which to live, learn, and work.” Abstract from the website of the US Environmental Protection Agency, EPA

The human tragedy in Louisiana (amazing photo survey on the US NOAA website) is a reminder that the traditional divide between “developed” and “developing” countries is increasingly obsolete. The number of millionaires (in US Dollars) in India today is 1 million, whereas in Louisiana and elsewhere in the US we find millions of people (mostly Black people) with no or very little social services. This illustrates what our friend Wolfgang Sachs calls the new divide; according to him and other scholars the world will no longer be split so much between rich and poor nations, but between the global poor and the global consumer class. The latter is represented in India, Moscow, Sao Paulo as well as Wall Street, while the former can also be found in large numbers in the suburbs of Los Angeles, Paris, and of course in New Orleans.

By the same token, an American lawyer was describing to me three or four months ago her encounter with the daughter (or grand-daughter, I don’t remember) of Mao Zedong shopping for Chanel outfits in Paris between two business meetings in London and Beijing...

Greenpeace USA (who have traditionally campaigned for environmental justice in the Mississippi river and Delta area) have documented the explosion two days ago of a chemical waste complex in New Orleans. The Los Angeles Times have published a map with all the oil rigs and pipelines in the region. The Independent says that “Hurricane Katrina gives a taste of things to come in an oil-hungry world”.

We are only beginning to hear of the environmental legacy of Hurricane Bush.

“The overwhelming human and financial impacts of Hurricane Katrina are powerful evidence that political and economic decisions made in the United States and other countries have failed to account for our dependence on a healthy resource base”, according to the Worldwatch Institute. “Alteration of the Mississippi River and the destruction of wetlands at its mouth have left the area around New Orleans abnormally vulnerable to the forces of nature. According to many scientists, the early results of global warming—90 degree Fahrenheit water temperatures in the Gulf and rising sea levels—may have exacerbated the destructive power of Katrina.”

Worldwatch President Chris Flavin said: “The catastrophe now unfolding along the U.S. Gulf Coast is a wake-up call for decision makers around the globe. If the world continues on its current course—massively altering the natural world and further increasing fossil fuel consumption—future generations may face a chain of disasters that make Katrina-scale catastrophes a common feature of life in the 21st century.”

Will the “no crisis without opportunity” rule work this time?

In the aftermath of the South East Asia Tsunami little more than six months ago, a lot of thoughts went into the need to rebuild the infrastructures and economies of that region in a sustainable and environmentally sensible way. Now that the US (of all countries on Earth, the one with the least sustainable production and consumption patterns) is hit, maybe the country will agree to rethink itself?

On the humanitarian rescue front, MoveOn has launched a Hurricane Housing initiative. The website also leads to other Citizens humanitarian initiatives.
Published by Unknown at 12:19 PM