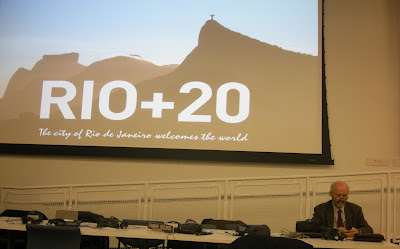 When in the mid 1970s I've first known Brice Lalonde, now Executive Coordinator of the Rio+20 Conference, he was correcteur d'imprimerie  in Paris for a living. It was before personal computers, word processors and spellcheck programmes existed (if you were saying "le PC" in those days you could only be talking of "le Parti Communiste"), thus the correcteurs were a very powerful guild. No editorial business, big or small,  could operate without them; they were uniquely skilled to correct in record time typos, grammar and spelling mistakes of course but also repetitions, redundancies, and even nonsense. Now we have computers, word processors and spellcheck programmes, but we see that still too often governments are  missing common sense. So sometimes when I watch the pace at which the Rio+20 text negotiations are going and note that we have less than 60 days to the Rio Summit, half-jokingly I wish Brice could get back to his original job and offer his correcteur skills to the UN.

I'm writing this from New York where I'm staying for another two weeks of "Informal informal" Rio+20 negotiations. The latest version of  "The Future We Want," the draft declaration that Heads of State and Government will be asked to consider in Rio now contains...272 pages, because it compiles all the options put forward by government delegations and despite an attempt by the Bureau to streamline the text. Even if we take only the paragraphs of "streamlined text" by the Bureau, it would still be more than 50 pages (a length which is generally considered to be too long for such a declaration) and it's anyway unlikely that the various negotiating groups would agree this week to focus on the Bureau's version only.

With all global environmental indicators in red alert, more than ever we need multilateral decisions. But in 2012, there must be better ways to conduct multilateral negotiations than listening to back-to-back statements week-after-week.  For example, the so-called Vienna Setting, an innovative, transparent and participatory arrangement used in the last twelve years in several UN processes (including the World Summit on Sustainable Development held in Johannesburg in 2002) has proven useful for negotiators to break their impasse.

But is there the political will to break the impasse?

Published by Unknown at 7:27 PM