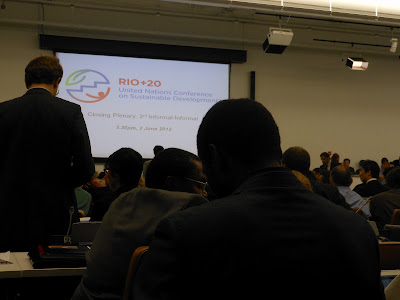 As we're all moving to Rio de Janeiro next Monday, a lot of people are asking me what differences I see between the mood at the original Rio Earth Summit twenty years ago and this Rio+20 Summit now.

I think the fundamental difference is that whilst twenty years ago we were building an edifice -- the legally-binding Rio Conventions (on climate change, biodiversity, and desertification), Agenda 21 (the agreed road map for sustainable development), and the Rio Declaration with its 27 Principles -- now what we're doing is putting our fingers in holes in the dyke to prevent a flood from demolishing the edifice. The enemies of social and environmental policy and regulation are very clever, and nasty. 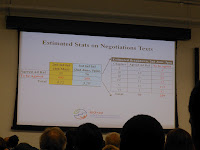 After last week's final session of informal consultations in New York from which I just returned there are still 259 paragraphs that have not been agreed in the draft Rio+20 declaration. With only a few days (and nights, certainly) left in Rio to negotiate can we say that we've reached crisis point? Probably yes if we consider that it took six months to have the remaining 70 paragraphs agreed by consensus. But it is important to recognize that countries with progressive proposals, at least on some issues have not caved in. UN processes are too often a race toward the lowest common denominator, but the large amount of square bracketed  text (still under negotiation) shows that we're not there yet, even though what's considered "progressive" in the text could and should be stronger. If there was no square bracketed text, there would be no tension, no drama, no story, hence little to do and report in Rio. Within the constraints of the negotiating text, progress and maybe even a few milestones are still possible on global environmental governance, on ocean governance and conservation, on the elimination of environmentally and socially harmful subsidies, or on the adoption of new indicators of wealth and well-being "beyond GDP".

With the negotiations moving to Rio, the government of the host country, Brazil is also now taking over the presidency of the talks. There are speculations that President Dilma Rousseff (also embroiled in a very big controversy over her proposed Forest Code) could prepare a different and shorter declaration, and that the detailed document we've been working on for six months in New York would become an annex. Short can be good as long as it doesn't empty the outcome of its substance.

Now the mood in Rio will be very different than in New York. New York-based diplomats are very good at defending and maintaining the positions of their respective countries, but they rarely have a mandate to act with the flexibility that is required in a negotiation; only the politicians who will be in Rio can exercise that flexibility. So I hope the politicians (ministers, cabinet advisers, parliamentarians, etc.) turn up early enough next week to change the dynamic and style of the negotiations. And that they hear the people in the streets, both in their capitals and in Rio: This is the United Nations, not the United Governments, and it's of all its citizens that a nation is made up.

Published by Unknown at 2:13 PM