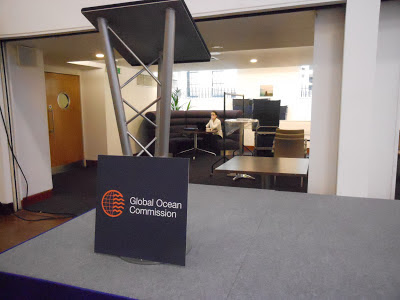 I’m writing from London where I’m attending today the launch of the Global Ocean Commission, a project I’ve been working with in an advisory capacity since its inception more than two years ago.

Co-chaired by the former UK Foreign Secretary David Miliband, the former South African Finance Minister Trevor Manuel and the former President of Costa Rica José María Figueres, the Global Ocean Commission is made up of about a dozen former leaders from the five continents, augmented by business giants. Many are still active in national politics or branches of the UN system. At first sight it may not look like the most sexy international environmental initiative. It’s not the first commission to be set up when the international community faces obstacles in addressing an issue - one of the most pressing here being the sustainable use and conservation of marine biodiversity in areas beyond national jurisdiction. And the recommendations these commissions come up with are too often ignored, albeit politely. So, what’s the big deal here? What’s the added value?

We’ve seen that one weakness of many past international commissions was a mandate that was too broad, resulting in a message that’s hard to get. For example, some commissions come up with over a hundred recommendations, so it’s hard for a key message to come across (apples and oranges). In contrast, the mandate of the Global Ocean Commission is straightforward: the conservation and governance of biodiversity and a remedy for overfishing on the high seas. The high seas is a very large area (nearly 50% of the surface of the planet), but there are commonalities that impact and concern every single one of us on this planet. The international community can do something there if it wants, because the high seas do not belong to anyone. It’s a question of political will. Overfishing and food security; illegal fishing, piracy and other security issues; human trafficking and other forms of social and labour abuse; unsustainable exploitation of fisheries, mineral and genetic resources and the unfair repartition of the benefits... Hopefully the sharp mandate can lead to sharp recommendations, easy for all to understand and sufficiently practical to make a difference.

Not the usual suspects:

Environmental activists like me, lawyers, marine biologists and climatologists have been drawing attention for years to the fate of the high seas. For example, a decade ago I helped to create the Deep Sea Conservation Coalition (DSCC), and more recently I worked with the High Seas Alliance at the Rio+20 Earth Summit of June 2012. All that time (let alone previously in my 25 years in leadership positions within Greenpeace) we’ve done great work, and it’s true the state of the ocean and the rest of the planet would be much worse if we hadn’t taken action. But I think it’s meaningful that people such as Ratan Tata of India, Yoriko Kawaguchi of Japan and Pascal Lamy from France are willing to acknowledge the importance of the issues and lead an initiative to tackle them. These and the rest of the Global Ocean Commissioners are people who’ve had to deal with extremely complex issues throughout their careers, so it will be interesting to see what their collective expertise brings. People such as me who’ve  been “in that tunnel” since unmemorable times should be interested to see if and how the Global Ocean Commissioners  come up with new ideas that can bring a bit of fresh air to the debate. At the time of writing, the Commission hasn’t even been formally launched yet (it will take place at 1830 GMT on Tuesday), but already a glance at Google and Twitter indicates that that people are intrigued.

As former leaders, all the members of the Global Ocean Commission have agreed to join in an independent capacity, regardless of other responsibilities they may hold within their government, parliament, party, organisation or corporation. This is important, because one lesson learned from past commissions and UN high level panels is that it’s important to be clear as to whether participants are there on their own behalf, as truly independent minds, or whether they’re just messengers. But even though many of the Commissioners are described as former, they’re still relevant: they’re people likely to continue to be active and influential in the future, which is important.

The Global Ocean Commission and its Secretariat, established at Somerville College, University of Oxford, have been set up for a short period of time. The Commission will meet four times between now and March/April 2014 when it is scheduled to issue its final report. In other words it’s a biodegradable commission. Thus, if the recommendations are good, it can empower governments, academics, civil society and private sector organisations to get in motion and come to grips with key high seas governance issues, both existing and emerging. As the Co-chairs are already acknowledging, the Commission will need the input of all these sectors if it is to make balanced, pragmatic recommendations, and the support of all these sectors to turn them into reality.

At the Rio+20 Summit last year, governments already agreed that the session of the UN General Assembly that will begin in September 2014 will consider the issues the Global Ocean Commission is set to address. As a result, the timing of the Commission’s final report is optimum, six months before the UN General Assembly. It can be the curtain-raiser that all important debates need, to help governments get the right focus. So, there’s a good chance that the Global Ocean Commission report doesn’t end up buried under a thick layer of dust.

All the ingredients are there, it seems.

This blogpiece is also available in español, HERE (AQUÍ) on the website of the Spanish news agency EFE.
Published by Unknown at 4:04 PM