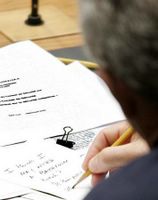 I am not sure whether the photo attributed to Reuters´ Rick Wilking that shows Bush writing a note ("I think I may need a bathroom break? Is this possible?") to Condy Rice at the UN Summit to ask her permission to go to the loo is a fake or not. The caption says: “U.S. President George W. Bush writes a note to Secretary of State Condoleezza Rice during a Security Council meeting at the 2005 World Summit and 60th General Assembly of the United Nations in New York September 14, 2005”. If you try to Google it up, you get it only on Blogs for the most part, so it may well just be a hoak. I have also checked Reuters’ website and I can’t find a trace of it, but that could just be the result of White House pressure, who knows?

Regardless of whether the photo is real or not – it tells us an important story relevant to this UN Summit that was originally meant to give a boost to the UN Millennium Development Goals. That is: in our world today around 2.5 billion people do not have access to adequate sanitation. So, in other words, Bush should feel lucky that he did not need to ask Condy to bring him a bucket. According to the UN’s own figures, approximately 10,000 children die every day from diseases associated with lack of drinking water, inadequate sanitation, and poor hygiene. Our friend Bertrand Charrier of Green Cross International who likes putting things in perspective, always reminds people that this is the equivalent of 30 Boeing 747 full of children crashing every day (thirty, every day).

The story of Bush going to the loo at the UN reminded me of a relatively wild idea I shared with Zehra Aydin from the UN Non-Governmental Liaison Service, back in January 2005, of a “strong statement” that could have been made at the opening of the Summit to make sure that world leaders do not forget (as most of them did in the end) the need to increase efforts to implement the UN Millennium Development Goals, and to avoid that the Summit be perceived (as is now the case) as yet another litany of nice good will speeches, but not very credible ones because everyone knows that the MDGs will not be achieved as long as governments that can make a difference have the wrong priorities, etc. The idea was perhaps too simple and too complicated at the same time: at the opening of the Summit, Kofi Annan would have announced that for the duration of the opening ceremony (what? Two-three hours?) there was no running water in the entire UN compound. To put everyone in the shoes of the 2.5 billion people who live with no access to adequate sanitation and the 1.2 billion with no drinking water. No running water around the conference facility (you need to go to the toilet, as Bush apparently did? Well, walk outside – only for 2-3 hours – like 2.5 billion people with no access to sanitation do every time of the day, every day of the year); no water in the Vienna Café, the UN coffee break hang out, and the cafeteria (Capuchino? No, sorry Sir, we have no water); no water in the press area (it would have certainly given them a spin for a good MDG story, and the films of the reactions of the delegates would have been interesting to watch); no water in the 38 floors of the UN compound (it would have been a bit chaotic, but come’on, it’d been only 2-3 hours). And of course if delegates had complained, they should just have been told that if they found it disgraceful to be like this for 2-3 hours, they should think how it is for an entire life, with no hope that it gets any better as long as those who can solve it (that is, the country delegates themselves) are having the wrong priorities.

Well, well, well. Hmmm. This was still a little bit too wild for the UN, of course. Earlier this year, I said at a UNEP meeting, that the UN External Communications folks are increasingly using advocacy strategies that are similar (and sometimes identical) to those that NGOs have pionneered (see for example, the UN Millennium Development Goals Campaign). But of course there is a limit.
Published by Unknown at 10:58 AM