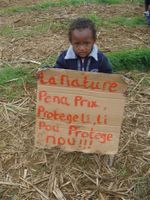 Our friend Véronique Le Clézio from Mauritius has sent to a fairly large group of people a series of photos in an email, that looks a bit like a bottle thrown in the ocean (you should set yourself a blog, Véronique).

Soooo, I picked up the bottle, and here is what I found:

The photos show the beginning of the construction of a highway in the South-Eastern part of Mauritius and people demonstrating against the project. According to the report Véronique has sent us, this project will cause great damage inside Ferney indigenous forest.

"A massacre against the remaining 2% of indigenous forest that is left in our country; sixty bird species are at risk, including some highly endangered ones", says the report. According to the Mauritian Wildlife Foundation "the area to be destroyed includes a high number of endemic species that are found only in Mauritius, including eight that are listed in the IUCN Red Data book of threatened species. It includes one species of trees whose number is as low as twenty -- virtually all of them in the area to be destroyed."

According to Véronique's email, the government of Mauritius appears to be divided on the issue.

If you are concerned by this story, one thing you can do is to write to the Mauritian Wildlife Foundation, and ask them what you can do to help from where you are.
Published by Unknown at 10:48 PM

Email ThisBlogThis!Share to TwitterShare to FacebookShare to Pinterest
Tags: Biodiversity