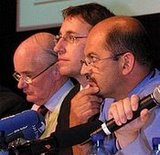 A few weeks ago a friend working at the United Nations Environment Programme (UNEP) asked me if I knew the nationality of Achim Steiner,the Director General of the International Union for the Conservation of Nature (IUCN) whose nomination as Executive Director of UNEP has just been confirmed today.

As I said that I thought Achim’s passport was German, my UNEP friend said: “Merde, c’est pas bon!” He was of course referring to the fact that with Klaus Toepfer, the out-going ED, UNEP has had a German national at the steering-wheel for seven years already. But I remember telling him in response: “Maybe it’s a good test; Kofi Annan keeps saying that the UN should make appointments on the basis of skills and competence, and not of politics and national quotas, doesn’t he? Nominating Achim regardless of his nationality is an excellent opportunity for Kofi to put his money where his mouth is.”

There were a lot of good candidates for the UNEP job. In mid-December, Kofi Annan solicited nominations from UN Member States. A race began among many candidates (declared and undeclared). Some were sponsored by their respective governments and others were not (or not really; depends how you read it or wanted to read it). The UN Secretary-General’s office had said anyway that they would not limit their choice to government nominees.

At the beginning of this month, pursuant to “a thorough review of the nominations by the Secretary-General and his senior advisers” a short list of five candidates became known, together with a set of criteria to guide the final decision: strong diplomatic, political and fund-raising skills; strategic vision and strong leadership; strong international profile in the environment field and thorough knowledge of environment and development issues; proven skills in the management of complex organizations; flexibility and vision to participate in an evolving international environmental architecture; good knowledge of the UN system and a commitment to the pursuit of reform (plus the usual language skills requirements). To my mind, these criteria were perfectly crafted for Achim, who has done all of this during his tenure as Director General of the IUCN.

The new Executive Director of UNEP is going to wear a pair of very big shoes that were tailored for Klaus Toepfer whose main merit has been to give UNEP the high-level profile it was lacking, and to steer the organisation through times of change (UN reform, including a difficult balance between the need to maintain legally-binding multilateral environmental agreements and to put voluntary public-private partnerships in the right place) and choppy seas (including the US war against the Kyoto Protocol, the emergence of tensions between multilateral Trade and Environmental agreements, particularly regarding Biosafety).

I guess that one of Klaus Toepfer’s regrets will be that UNEP and the UN at large weren’t able to conclude satisfactorily during his tenure the discussions aimed at reinforcing international environmental governance, including universal membership of UNEP, and the proposal to upgrade UNEP to the level of a UN agency. In order to secure more integration and broader participation, in the year 2000 Klaus Toepfer initiated the Global Ministerial Environmental Forum (GMEF) that meets each year in parallel with UNEP Governing Council. It has been very good, but it does not solve all the issues, especially UNEP’s lack of funds.

UNEP’s low level of funding is not only a cash issue. It is very politically charged, because as a result the organisation relies too much on voluntary contributions from member States as well as other sources. A good example of the vulnerability that this entails was what happened in 1995 after Elizabeth Dowdswell (Klaus Toepfer’s predecessor as UNEP ED) wrote to the French Environment Minister to convey expressions of concern which she had received regarding the French Government´s decision at the time to resume nuclear weapons testing in the South Pacific: France decided on the spot to freeze its contributions to UNEP and this went on for several years…

Published by Unknown at 7:34 PM