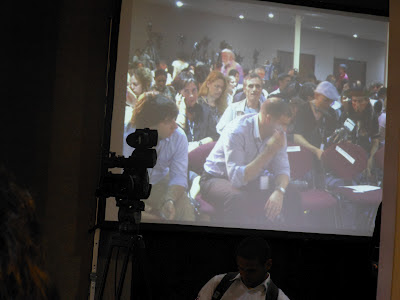 I have refrained from blogging for three days until today, the final day of the Rio+20 Earth Summit. Not only because I have been (and continue to be) extremely busy with a multitude of tasks here. But also because I wanted to wait for the dust to start settling. There has been a quasi-universal condemnation of the Summit outcome and the way it was conducted by the Brazilian Presidency. What Ban Ki-moon had rightly called a one-time-in-a-generation opportunity has failed us (and him). I understand and share the frustrations -- especially from those who attended such a summit for the first time, and in particular for the youth groups. But life goes on (or -- rather -- Life has to go on).

So, what lessons have we learned, and what are the next steps?

Now that the conference is almost over, many are asking whether such summits are a waste of time, and whether they are always doomed to failure. This is not new. For example I remember that even after the first Earth Summit in 1992 many commentators from NGOs were complaining that Agenda 21 was too weak, that it would not do the job, that the Rio 92 conventions had loopholes, etc. Yet, nowadays Rio 92 is always described as a milestone by the environmental movement. In Johannesburg ten years ago (Rio+10), frustration reached another level; even the then UN Secretary General Kofi Annan  himself said on the final day that "the era of large summits is over." But when the UN General Assembly decided in December 2009 to organize Rio+20, there was renewed interest and broad participation, even though it is true that many people envisaged that governments in 2012 would not have the ambitions we need.

"Waste of time" are the words that Sarah Palin and her cronies from the Tea Party like to hear. Rio+20 has drawn considerable attention to the need to protect our environment and to build a more equitable and just world, even if it has not delivered. But it is true that in future it's got to happen differently.

Listening to the litany of speeches by the Heads of State and Government here in the last three days, and hearing all of them say that the environmental crisis is upon us, that we need action and not just words, effective targets and measurable progress are urgent, that we owe it to our children, etc, etc. reminded me that the way these summits are conducted needs a thorough re-think. Until now, the appearance of Heads of State and Government at such summits has taken place at the end, after a lengthy process where civil servants represent their countries (this time it started in New York in January, 2011). Civil servants are hard pressed to reach agreement before their bosses (Heads of State and Government, Ministers...) turn up. The result is a race to the bottom, the search for compromise at all cost, also known as the lowest common denominator which reflected this time in the document called "The future we Want" which oddly everyone says is not the future we need.

So, why not invite next time the Heads of State and Government to speak first? They would share their bold vision ("we need action and not just words, effective targets and measurable progress are urgent, we owe it to our children, etc."). This would empower the negotiators to act more in conformity with what their bosses said, and they would presumably be less inclined to dive into the lowest common denominator pool. That would make a lot of sense; after all aren't the Heads of State and Government elected to lead?

It's taking some time to develop strategies to work from the 49 page "Future we Want" document. But already there's a lot to build from in the document. Here are just a few examples:
Because I've been at many summits and international fora, maybe I've got a tough skin and once the initial anger has passed I'm ready to go on. But what's most important is that all the young people who've been here don't get discouraged. They've got to be back the next time!

A metamorphosis takes more time than a revolution. But maybe it will have more lasting effects.

This blogpiece is also available in español, HERE (AQUÍ) on the website of the Spanish news agency EFE.
Published by Unknown at 7:09 PM