Saving face or saving the Planet? 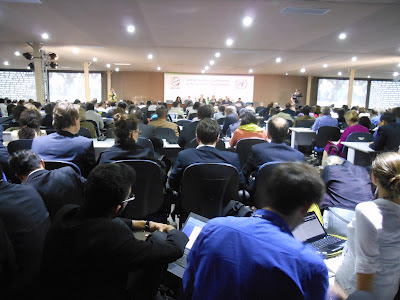 There was general disappointment last night when the Brazilian presidency of the Rio+20 Earth Summit bullied delegations into accepting a considerably watered down draft of the declaration to be brought forward for approval by Heads of State and Government tomorrow.

And there was shock at the way the Brazilian Foreign Affairs Minister Antonio Patriota banged the gavel at the beginning of the plenary this morning to declare the text adopted without giving any time to delegations to react or take the floor.

The group of African countries demanded during the Plenary that the text be amended to include a decision to adopt a new name, UN World Environment Organization,  for the 40 year old UN Environment Programme (UNEP) which the document pledges to strengthen. But Patriota completely ignored them.

However, I have now heard that the Brazilian Communication Minister recognized publically this afternoon that the Heads of State and Government could introduce amendments to the text tomorrow. And I just came from the press conference of the US delegation, where Todd Stern, US Special Envoy on Climate Change also recognized that this was possible, even though of course he said he did not hope so and thought that -- as we know -- the Brazilian presidency would do everything in its power to prevent this from happening.

Our hope has been that the Heads of State and Government come to Rio to save the Planet, not to save face. Technically this is still possible. But do they have the political will?

This blogpiece is also available in español, HERE (AQUÍ) on the website of the Spanish news agency EFE.
Published by Unknown at 10:24 PM