The mad man who thinks he owns the sun 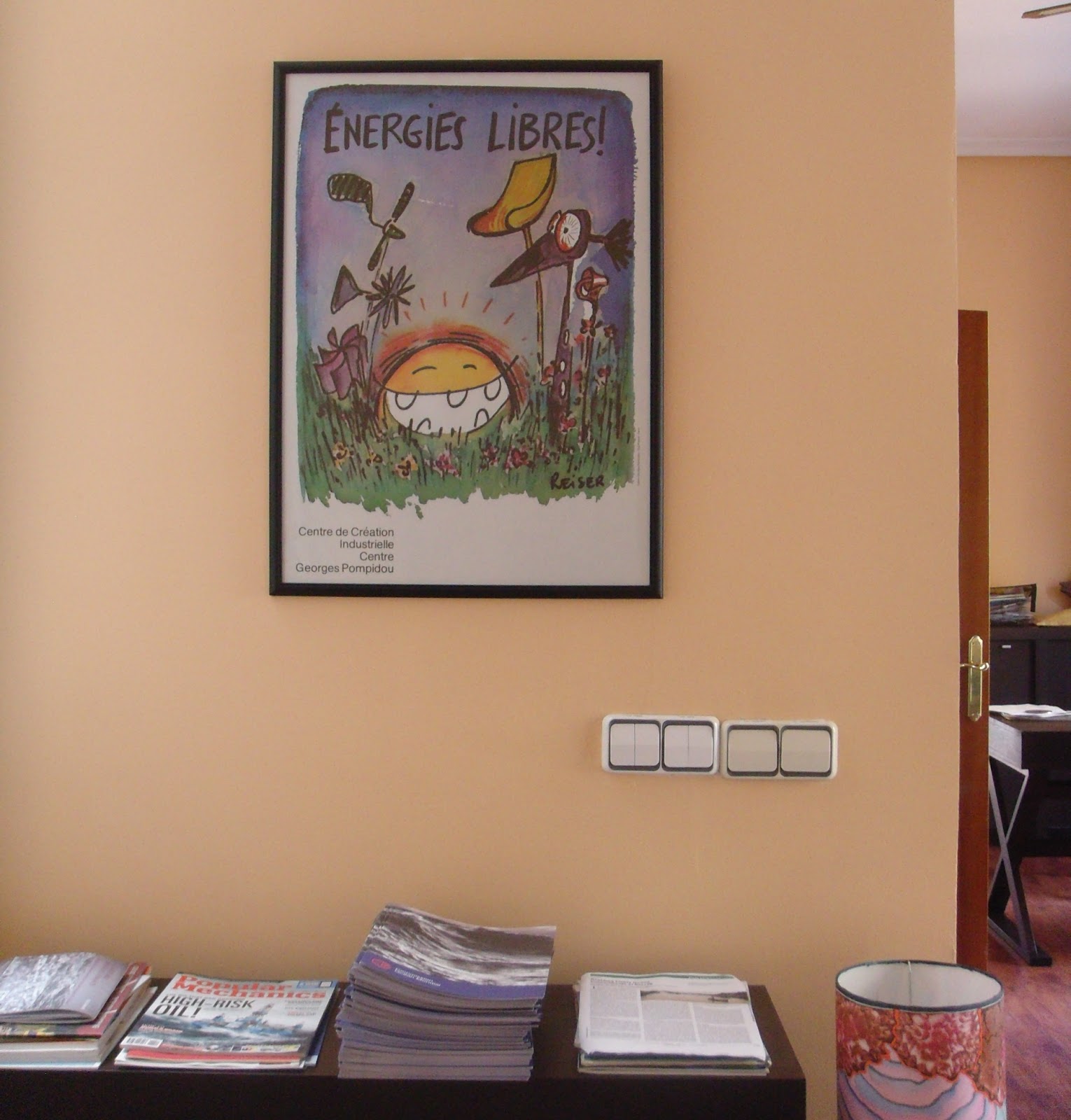 Among many other memorabilia of the environmental movement, in the entrance to my office there is a poster in French called "Énergies Libres".  Dating back from around 1976 or 1977 and authored by Jean-Marc Reiser, one of Paris' leading underground artists of the time, the poster was made to promote one of the very first exhibitions displayed in the then brand new Pompidou Centre in the heart of Paris, dedicated to wind, solar and other alternative sources of energy -- pretty much a science fiction-like proposition at the time. Looking back nearly fourty years later, it was not only amazing that we, green pioneers, were already pointing to a future that has now become a reality, but also a daring sign that it was displayed in the museum named after President Pompidou, the very same who'd launched in 1973 (one year before his death) France's massive Tout Nucléaire programme. Of course, conventional wisdom at the time suggested that we were mad to believe that solar, wind and other alternative sources of energy would play a role in the future. But now, with France and the rest of the world desperately looking for the right energy transition path, we're paying a high price for the nuclear and fossil fuels addiction madness. Future generations will continue to pay forever for the decommissioning of nuclear installations, the storage of nuclear wastes, and the costs of climate change. As REN21, the global renewable energy multistakeholders platform points out in their Renewables Global Energy Futures report, "the future of renewables is a choice, not a foregone conclusion."

Looking at my old framed poster during a visit at my office this week, a Spanish University professor was interested to see that in the 1970s renewables were called "énergies libres"-- free energy. Free like in "good bye to the monthly invoice from your local electricity company", and also free like in "freedom, self-made, autonomy".  "That's why Rajoy has declared war against renewables!", he said, "he doesn't want people to be free!". The professor was referring to the latest of a series of measures taken or proposed by Spain's Prime Minister Mariano Rajoy to dismantle Spain's renewable energy sector, once one of the most flourishing worldwide.

In a surprise move last week, Spain's Industry Ministry announced that people and businesses producing their own electricity with photovoltaic cells would have to pay a toll 27% higher than the tax consumers pay for conventional energy. In the country that attracts millions of tourists every year with the slogan "Everything under the Sun", the Spanish Government's attempt to privatize sun rays only benefits a handful of electricity corporations and castigates small entrepreneurs and individuals who have invested in good faith to boost clean energy. This is madness. It doesn't make any economic sense in a country where more than 80% of energy needs are covered by foreign imports (fossil fuels and uranium) despite a high tech domestic renewables sector that instead needs enhancing public policies. It doesn't make environmental sense either, in one of the countries most vulnerable to climate change according the Intergovernmental Panel on Climate Change (IPCC) and with an increasingly obsolete and aging nuclear park. As Teresa Ribera, a former Secretary of State for Climate Change Policy puts it, "charging a toll for self production doesn't make sense; it's like charging for lightening firewood."

I don't know if it's because he's caught a sun burn, but it looks like Prime Minister Mariano Fossil Rajoy has gone mad this summer.